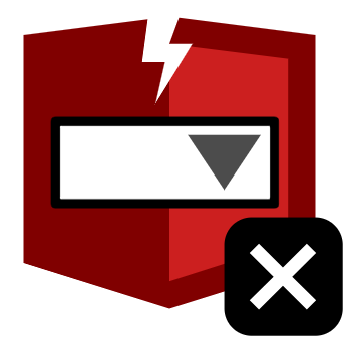 You can review what this means technically and the impact inside of our Results dictionary. Today I am only looking at this from the perspective of a Broken ARIA menu Error found on a higher ed website from our Higher Ed in 4k project.

On this admissions page there is a navigation bar to the left of the page content. This side navigation is a list with 6 items each having sub items. The ARIA role=”menu” is used on the sub menus.

WAVE has flagged this an a Broken ARIA menu because the menu uses role=”menu” and has no children with role=”menuitem”. An ARIA menu needs menu items.

This website on a screen reader tells me it is a menu, which tells me I should be able to navigate with the arrow keys instead of the tab key as well as quite a few other interactions. It is confusing and not helpful. Accessibility has been decreased rather than increased.

Where does this ARIA come from if it doesn’t help or even hurts accessibility?

In this example there is other code that was pasted as well that doesn’t do anything. This navigation was never tested with even a keyboard, let alone a screen reader. I can’t even access the sub menus with anything but a mouse.

First I removed the role=”menu” on the sub menu. The WAVE error is now gone, but there is still some more cleanup and other issues I fixed. I then removed the aria-haspopup=”true” from the <i> for a few reasons. It is on a non-interactible element that has aria-hidden=”true”, it is hidden to a screen reader and does nothing. The other reason is it is used to indicate an aria menu opens which we have removed.

I removed role=”navigation” from the <nav> element as it means the same thing as <nav> and is redundant. When <anv> first started being used it was a good fallback as browser support increased but isn’t needed anymore.

The last step needed is to make sure that you can edit this with a keyboard and that the aria-expanded=”false” changes to “true” when the sub navigation expands. This website uses Bootstrap which supports this, all we have to do is follow the default Bootstrap example by adding a few classes. We can even remove the custom JavaScript used to show the sub navigation only on hover.

With these changes we have simplified our JavaScript and html, it is accessible to people with disabilities, and a better user experience for everyone now that it supports keyboard use.

Tired of testing pages one at a time?

Pope Tech can get you up and running with usable web accessibility data in just a few minutes.

Want to receive emails with accessibility content similar to this article?

If you subscribe, we will email you web accessibility insights or things we learn a few times a month. You can unsubscribe at any time.